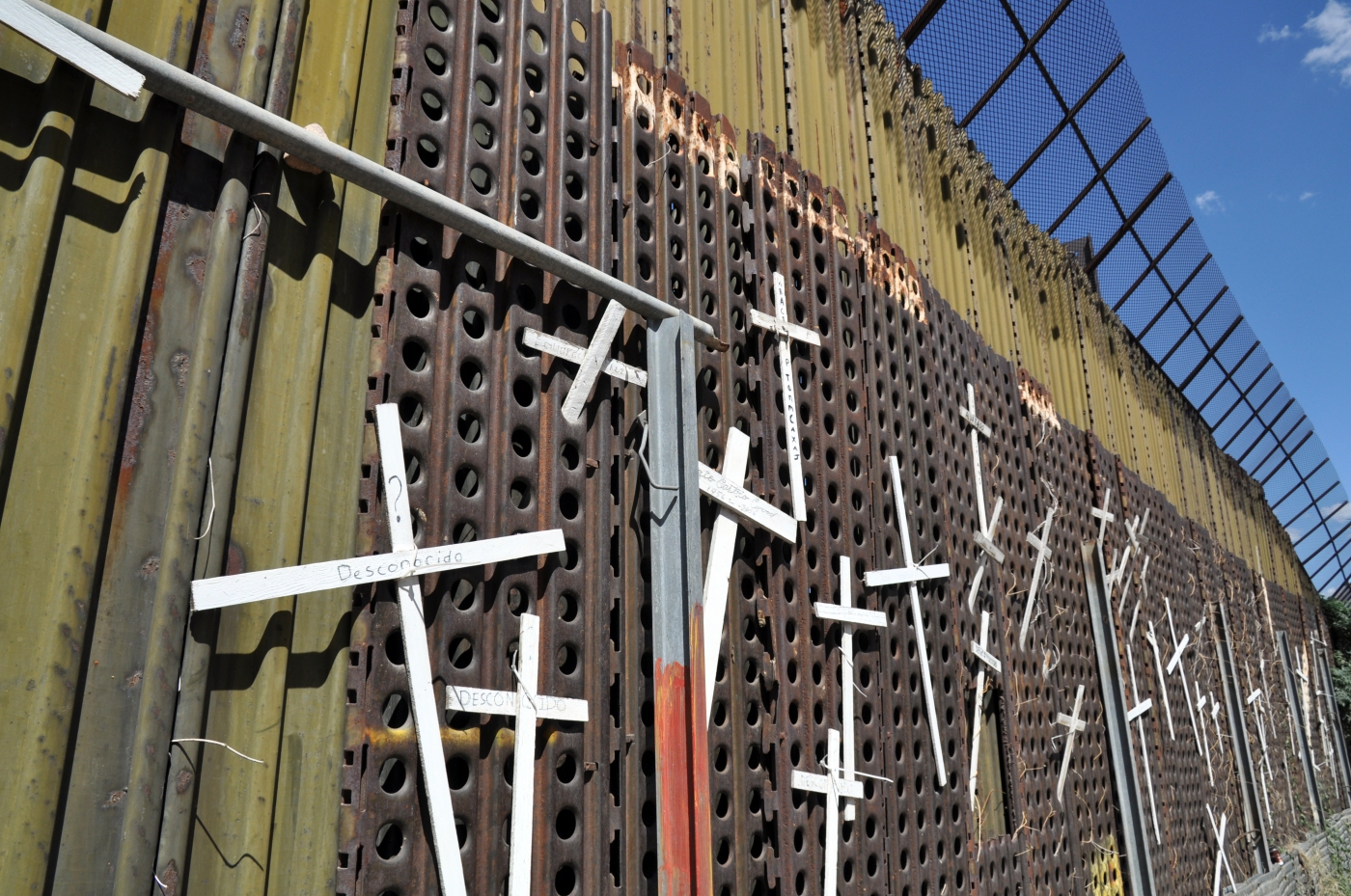 It started out as a simple exercise in playing Devil’s Advocate. Students in my Principles of Sociology course were engaged in a discussion about immigration and border security. As I often do when the class becomes an organic discussion, I endeavored to guide the students into using sociological analysis. I offer data to clarify the discussion and correct invalid data when it is used. At times, I ask a counter-intuitive question to force students to alter their perceptions.

I especially like to target “common sense notions” during such discussions. The opportunity presented itself when one of the students stated (paraphrase) “even Bernie Sanders said an open border would mean we don’t even have a country.”

In fact, what Bernie said was, “It would make everybody in America poorer—you’re doing away with the concept of a nation state…”

So I couldn’t let that go.

I don’t remember the student’s specific response. This was a couple years ago. His explanation, from what I remember, boiled down to, “well…it’s common sense.”

It may very well be common sense in that it’s common to believe that this position is sensible, but history and sociology offers a broader view.

Oh, and here’s something that might just blow my progressive readers’ minds. Just because Bernie said it, doesn’t make it true.

Consistent with a recurring theme of this blog, the truth is a bit more complicated, but an analysis of the evidence makes clear that the existence of a nation state is not even a little bit contingent upon having a secure border…because that’s not what a border is for.

If a secure border were necessary for sustaining a nation state, the United States would have been in trouble long ago. The U.S. border with Mexico has a long and contentious history. The border, as it exists today, was the outcome of the Treaty of Guadalupe Hidalgo, ending the Mexican American War, and the later Gadsden Purchase. Even at that, the rugged nature and isolation of the terrain made it difficult to clearly define the border until much later in the century. One thing was certain, the border was not particularly well defended.

Mexican workers, unimpeded, often crossed the border into the United States, following the picking seasons and seeking jobs in the United States. There were also times when Americans migrated to Mexico for the same reason. Again, they were unimpeded. Yet the United States continued to exist as a nation state for almost one-hundred years despite this neglect. So did Mexico. The border patrol was not created until 1924 in concert with a new, racist, quota system. This quota system, however, despite its clearly bigoted intent, did not limit Mexican immigration. It pertained to the dirty peoples of Europe–namely my ancestors.

Well, one might argue, Those were different times. The world is much more dangerous than it was back then.

Yeah, not really. The relationship between the United States and Mexico was, at that time, pretty strained. Remember, one-third of the land area of the United States was taken as a result of the Mexican-American War…and Mexico held that grudge for quite some time. Still, cross migration continued. This, despite the fact that Native American resisters often crossed the border to avoid capture. The renegade Pancho Villa conducted raids across the border. In 1917, Germany attempted to encourage Mexico to invade the United States. A telegraph from German Foreign Minister Arthur Zimmerman offered to return lands ceded by the Treaty of Guadalupe-Hidalgo in exchange for Mexico’s military assistance should the United States enter World War I to aid Britain and France. The resulting scandal encouraged the U.S. to enter World War I…still the border remained mostly open.

True, there were instances in which security was increased along the border. Regardless, the Mexican-American border remained porous. Not only did the United States continue to exist, but it thrived, becoming the wealthiest, most powerful nation in the world during this time.

How did that happen?

It’s pretty simple, really. The function of borders is to define jurisdiction, not to exclude “those people” from stepping over it.

Think about it. Right now, I can travel freely, without a single concern, from Florida to Georgia. The border is open between these two states, despite the fact that the violent crime rate in Florida is about 25% higher than that of Georgia. Yet both states continue to exist.

But those are states.  That’s different.

Why is it different?

Florida is a political construct recognized as legitimate. Georgia is a political construct recognized as legitimate. The same is true for Mexico and the United States. That fact does not change just because someone can drop their laundry off in Nogales, Mexico and then grab a sandwich in Nogales, Arizona before returning home. So long as everyone agrees where Mexico ends and Arizona begins, there really is no problem between the sandwich shop and the laundromat.

Borders, whether they are between nation-states or national states, are nothing more than imaginary lines drawn by agreement between the relevant political parties. If I buy a sandwich in Nogales, Arizona, I understand that that sandwich is regulated by the U.S. Food and Drug Administration. If I eat a sandwich in Nogales, Mexico, it is regulated by the Comisión Federal para la Protección contra Riesgos Sanitarios. That’s pretty much what the boundary does. It defines the jurisdiction.

There is no real difference. It’s simply a matter of jurisdiction. If I get caught with my trunk full of coke in Atlanta, I’m subject to that jurisdiction. If I’m caught in Jacksonville, I go to a different court. Either way, the law enforcement process remains the same. No walls needed. The same holds true with carrying drugs from Mexico to the United States. The drug dealer is subject to the laws relevant to the jurisdiction in which they are caught. A wall does nothing but increase the incentive for smuggling, as the demand for the drug does not decrease just because the drug is harder to get. If anything the wall only makes the product more expensive, increasing the incentive to provide it.¹

The imaginary construct of borders is clear in the renegade history of Geronimo. The Apache warrior really didn’t recognize the legitimacy of the Mexican-American border. When he was being pursued by Americans, he ran into Mexico. When he raided Mexico, he ran into the United States. The militaries of the respective countries had to respect the line for jurisdictional reasons, but Geronimo didn’t. Eventually, Mexican and U.S. militaries worked together, and time was up for Geronimo.

And this is the bottom line. Walls, fences, security checkpoints, militarization and security forces have very little to do with security. They are mostly tools by which the powerful control the powerless. Walls perpetuate economic inequality by blocking the free movement of labor while capital is allowed to move without obstacle. When labor cannot follow capital, labor is at a disadvantage. The free movement (circulation) of labor is a position supported by philosopher Adam Smith and, thus the Adam Smith Foundation.

At the same time, walls perpetuate militarism by isolating the victims from the beneficiaries. Most of the refugees searching for a home today are the victims of American wars. Perhaps they are fleeing the American War on Terror in the Middle East. Our Central American brothers and sisters are largely escaping from the blowback caused by the War on Drugs. We might be less inclined to wage war if we actually had to accept responsibility for our actions. Of course, this would impact profit margins for some of our wealthiest companies.

We are living in an increasingly global political-economy. This global system is based on a long history of exploitation. Consequently, the world can be divided into nations that are beneficiaries of the world system and its victims. Our current refugee crisis is one in which the victims are trying to escape their captors. When dealing with a victim/victimizer relationship, the very first strategy is to create avenues of escape for the victims. Those who would block those avenues are complicit in the ongoing victimization.

Militarizing our borders is not a solution to our current refugee crisis. It is either an attempt to abet the victimizers or to hide from the consequences of our complicity in victimizing others. Either way, the push and pull factors do not change for the refugees. Securing the border only incentivizes illegitimate means of crossing, a process that empowers new victimizers in the form of coyotes.

Opening the border by creating easier, legitimate avenues for escape not only puts us on the right side of history, it is also more sensible policy. Imagine a system where an immigrant can do what my Great Grandfather did in 1892, namely, show up and register with an immigration official. Even if a background check were required before entrance, liberalizing the system would preclude the necessity of an expensive and ineffectual militarized border. Imagine if, instead of armed police and soldiers, we sent social workers and immigration experts to expedite processing of migrants and refugees. Instead of a wall we provided shelter and medical assistance to those who need it. This would be more humane, more effective and even cheaper–and we wouldn’t be villains in the eyes of history.

Furthermore, there’s no reason why we can’t do this. Borders are nothing more than jurisdictional fictions. There’s no intrinsic reason why a border must be “secured” militarily, as examples all over the world demonstrate. The only people who want an armed border are the xenophobes, bigots and cowards who are facing a world in which they are increasingly irrelevant.