According to the news, we are in the throes of the longest government shutdown ever. Really? Are we? After all, “essential” services are continuing to be performed by civil servants who are not being paid. Other services are either making use of independent funding sources or money they find under their mattresses.

The bottom line is that the government isn’t exactly shut down. Even referring to it as a partial shutdown is a bit of an exaggeration. The government is still providing its essential functions. It’s not shut down. And this is a problem.

At first glance, this strategy seems to make sense. After all, essential government services should remain open because shutting them down would be harmful and dangerous to real people whose lives depend on these services. A real government shutdown would crash the economy and even leave our nation vulnerable to attack. So essential services must continue while “non-essential” services can be shut down. How else could we conduct this struggle?

Well, yes. That’s the point. Shutting down the government in order to force legislation isn’t how we are supposed to be fighting legislative battles. In fact, it’s insane. It’s not the way things are supposed to be done. The Constitution and two-hundred and thirty years of bureaucratic practice define the process by which proposals become law. Shutting down the government is not part of that process. It’s not part of the process because it is a phenomenally bad idea. In our system, the government is essential to the functioning of our society. We may not like that fact. It may make us uncomfortable, but it is a fact of how our society is structured.

Furthermore, what constitutes an “essential” government service is pretty flexible. The government provides countless services that may be more essential to some sectors than it is for others. Take, for instance, farmers whose livelihoods are threatened by our ongoing tariff wars. The government offered support. After all, soybean farmers are not suffering through any fault of their own. They are the collateral damage of trade policy. Government checks for this group are “essential”, but they are not essential for the corporate interests that our state serves.

The government check hadn’t arrived, and John Boyd was out of seeds. So he left his family farm here in southern Virginia on Tuesday and went to the local Farm Service Agency office, a last-ditch attempt to see if any essential personnel with the U.S. Agriculture Department were still working. He was hoping they could help, even with the partial federal government shutdown stretching on with no end in sight.

Meanwhile, when it turns out that a government function is essential to the financial markets, the government jumps. When mortgage lenders did not have access to government services they need to confirm the income of potential borrowers they may have been forced to stop lending until that service was restored (or…gasp…actually pay for this service themselves). The government jumped and decided that providing income transcripts to mortgage lenders was, after all, an essential function.

It’s so essential, in fact, that IRS clerks are being paid to provide this service while, say, families of Coast Guard members are being advised to sell their belongings to make ends meet. I guess securing the border isn’t so essential that we need to actually pay the people who do it.

Wait! What? Isn’t that what this mess is all ab… 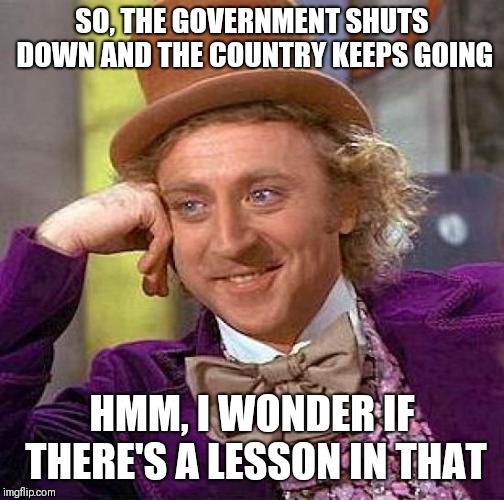 In the meantime, this government shutdown plays into the conservative myth of government. Remember, the American conservative movement is premised on the Reagan mantra that government is the problem. The government does not have, according to the right, an essential function with the possible exception of the military…which is, ironically, the most essential thing ever. Consequently, we see memes like this going around social media.

Well, no. In fact, the government isn’t shut down and that’s a big reason why the country keeps going. The perception of a government shutdown without the accompanying apocalypse, however, plays into the hands of the right wing. The conservative base can enjoy a government shutdown to advance their xenophobic convictions without actually having to sacrifice. So long as the Republican Party can keep this up, can protect their base from the consequences of their actions while framing the partisan standoff in terms of protecting them from “those people” government shutdowns can become standard legislative practice.

What if a government shutdown actually involved shutting down the government? Period.

Even if we exclude those agencies with independent funding sources, the results would be catastrophic. All service members go home and, if out of the country, need to find their own way to cope. Border security, the Coast Guard, the FBI, DEA, CIA, NSA, ATF, etc,. all furloughed. Go home. TSA and air traffic controllers? Sorry, government shutdown. No flights until this is over. Essential services for business and finance is over. Veterans hospitals are boarded up. The U.S. Treasury is closed, no bonds, no treasury services. All federal transportation and communication services halt. I could go on. Have a delicate experiment going on in a government lab? Hope it lasts. CDC? NIH? Nope. Hope you don’t need them during this shutdown.

If we are to have a government shutdown, then let’s shut it down.

Ironically, the most impacted by this would be the conservative base, just as many Republican-leaning farmers are feeling the consequences of their actions.

Yes, this would be immensely destructive to the point of a combined national defense crisis and economic collapse. Within a day, perhaps within hours, this particular executive strategy against the legislature would become so unpopular that people would demand its end.

That’s exactly the point. If we are forced to feel the pain of a real government shutdown, perhaps we could return to legislating a little closer to the way it’s supposed to be done.

Maybe our newfound understanding of just how essential the government is in our lives could even lead us to debate how to construct democratic checks against a dangerous accumulation of state power.

Until then we are stuck fighting the xenophobic hordes and their bought and paid for representatives in office.