NO, I’M NOT BEING SARCASTIC…AND DEMOCRATS NEED TO LISTEN

…because what I’m about to say is the reason why there will not be a “blue wave” in 2018 and why Donald Trump will take the Oath of Office again in 2021.

Donald Trump’s record has been absolutely terrible. He’s alienated our allies, empowered our enemies and turned his back on the disempowered. His policies in the Middle East are escalating conflicts and human rights abuses. He has shaken the economy through his ill thought out trade wars.  He has waged war against the social contract, the environment, the safety net. His administration has been a miasma of corruption, cronyism, nepotism, and conflicts of interest. He has made it easier for corporations to exploit and to poison people and the environment. His only major legislative achievement has been a major tax cut for the wealthy–including himself–resulting in an outrageous deficit and ballooning of the national debt that will have to be paid for with barbaric cuts to popular entitlements. Meanwhile, he continues to spend lavishly on militarizing the nation.

Oh, and let’s not forget concentration camps for children. Let’s never forget that. 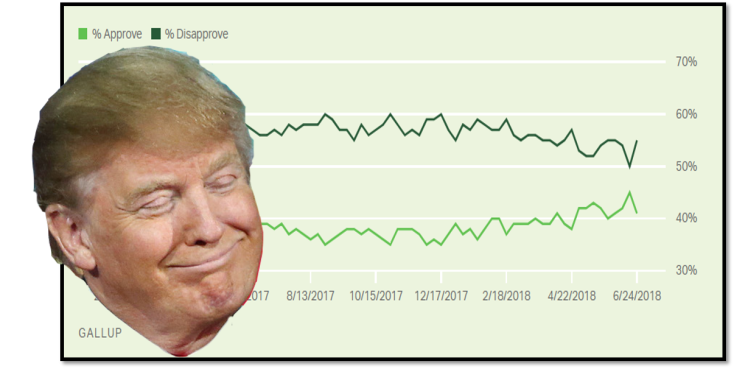 How is this even possible?

Well, it’s really simple. All of the terrible things that he’s doing…is the stuff his base wants him to do. He’s feeding his base a diet of nice, marbled red meat and they are eating it up.

The fact is that Trump is giving being more loyal to his base than any other president in generations. That his base consists largely of “deplorables” is irrelevant. He is giving his base what it wants, and there’s something commendable about that. Making life miserable for brown people. His base loves it. Socking it to those Chinese. All for it. Making those socialist Europeans pay. Give us more. Random stuff that makes the East Coast Liberal Elites spit their lattes and choke on their kale…Don’t stop, Baby!

Meanwhile, the ubiquitous right-wing misinformation machine gives the idiots, bigots and sociopaths the cover and the talking points necessary to justify their idiocy, bigotry, and sociopathy on Facebook, in family gatherings or in public. It gives them the legitimacy of sincerely held beliefs.

So, Trump followers will show up for him and his candidates. Why wouldn’t they? They are getting what they want and they are not suffering any real consequences for it. At least, they are not suffering any consequences that cannot be blamed on the Democrats, foreigners and brown people. This is smart politics. Trump found the most authoritarian personalities in politics and he made himself their authority. He’s locked, no matter what he does.

Imagine, if you will, if Obama had been half as loyal to his base, the progressive left, as Trump is to the wingnut right. Imagine the public option, card check, an alternate energy New Deal. The entire political calculus could have been different. Instead, we got Rahm Emanuel calling the base “fucking retarded.”

Imagine if progressive felt they could trust Hillary to live up to the progressive promises that she was making in the same way the right could trust The Orange Don to cling raptor-like to the slithering promises he spewed.

Instead, the Democratic establishment seems to be riding on a false sense of certainty that progressives will show up for milquetoast Dems just by virtue of the fact that…well…Trump. That didn’t work in 2016. I see no reason to believe it will work in 2018 or 2020 for that matter.