THE DOUBLE STANDARDS ARE PALPABLE

I’m really not a fan of the “When Obama Did It…” argument. Unfortunately, in today’s political climate it’s really hard to avoid.

We always need to remember the Republican Caucus Room Conspiracy and the depths they went through to undermine President Obama. On the day of Obama’s inauguration, top leaders of the Republican Party met at the Caucus Room, a restaurant in Washington DC to decide upon strategy. Neoconservatism had been totally rebuked between 2006 and 2009. The U.S. was in a perpetual state of war and facing economic collapse under the guidance of the stalwarts of the conservative movement, by then fully encamped in the Republican Party. The conservative GOP was, as Rachel Maddow put it, in the political wilderness.

At the Caucus Room party prelates settled on a plan to come back into political relevance. They decided to obstruct, stonewall and undermine everything that the president and the Democratic Party did, regardless of governance.

Yes. This happened. And thus was born the contemporary Republican Party. The GOP even turned their backs on ideas that they used to support, like the individual mandate in health care, just to guarantee that Obama had no victories. And it worked. At least if you look at the political map. The Republican Party went from the Political Wilderness to sitting on the Iron Throne. They are now running the tables.

But now they have to deal with their clear contradictions. They have to move from a party that obstructs governing to a party that governs and that can only be accomplished if we have short memories.

So now we have President Trump holding a summit with Kim Jong Un. What do we see? One can’t help but ask, what if this were Obama? How would the right respond? We don’t have to look very far.

Just before I switched over to the new Mad Sociologist Blog format, one of the last commentaries I made on the Original Mad Sociologist Blog had to do with the Republican response to Obama’s Iran deal. Obama meeting with Iran was just as historic, and just as important as Trump’s meeting with Kim. However, it was done without the same fanfare. The reason for the secrecy, which the right condemns, is because by the time a diplomatic opening happened with Iran, it was clear to The President that he would be crucified and undermined by the GOP and the right-wing propaganda machine.

We know this because when the Iran deal did finally come out, Obama was crucified and undermined by the GOP and the right-wing propaganda machine. In fact, the Republican Party, according to some evaluations, may have committed treason to undermine the peace process. Below is a post I wrote in response to the GOP’s attempt to scuttle the agreement and the history of Republican diplomatic obstructionism.

WHY REVELATIONS OF REPUBLICAN TREASON SHOULD COME AS NO SURPRISE 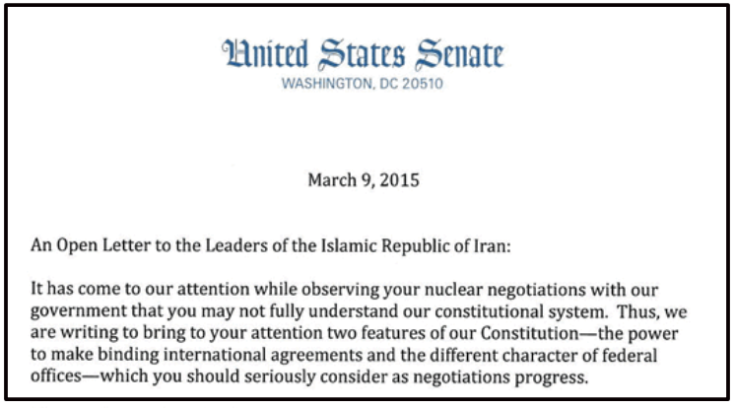 I have to admit when I first learned of the Republican attempt to undermine the Obama Administration’s negotiations with Iran I was surprised. I rubbed my eyes and temples, quite possibly spewed some expletives, and pushed myself to read the open letter to Iran, what turned out to be a full page combination of condescension insult and ignorance. ‘Unbelievable,’ I thought. Directly undermining the President’s constitutional authority to negotiate with a foreign power is beneath even the shallow dignity of the Republican Party. Surely, they wouldn’t go that far.

Once I rubbed almost permanent vision patterns into my eyes, however, I realized that my immediate response was ill-considered. There was nothing surprising about this letter after all. Republicans have demonstrated, time and again, that they are willing to cause any amount of suffering, pain and even death in order to achieve power. They are the ultimate Machiavellians. Any tactic, no matter how insidious, will suffice.

This is not the first time or even the most extreme example of GOP complicity in undermining presidential negotiations. Hell, it may not even be the first time that Republicans sought Iranian collusion in their political games.

The most notorious, deadliest case of Republican diplomatic sabotage had to do with the Paris Peace Accords in 1968. By 1968, it was clear that the Vietnam Lie was a catastrophe. The Johnson Administration was engaged in peace negotiations for about a year as the presidential campaign slogged through the summer. In October, a month before the election, President Johnson was sure that he and the North Vietnamese had reached an agreement that would lead to a cease-fire and a framework for peace. This diplomatic victory could have turned the election in favor of the lackluster Hubert Humphrey, handing Tricky Dick yet another humiliating political defeat. But it would have ended the Vietnam War, saving countless lives.

Things did not go as planned. Instead of a framework for peace, South “Vietnamese President Nguyen van Thieu was suddenly laying down obstacles to a possible settlement in the Paris peace talks.” He was scuttling the peace process. Why? It turned out that a Nixon campaign official, Anna Chennault, convinced Thieu to block the peace process for a better deal a future Nixon administration could deliver. Johnson did not get his peace, but Nixon won his election. The outcome was no bargain for the South Vietnamese.

Neither was it a bargain for the United States. According to the national archives, over 20,000 American soldiers died in Vietnam from 1969 to the end of the war. But Nixon won his election. He did not, however, satisfy his promise of “peace with honor.”

There was something about President Reagan, just not what we thought. According to the Christian Science Monitor, the major parties involved with the Carter negotiations all agreed that the hostages should be released. Abolhassan Bani-Sadir, the first President of the new Iranian Republic, said, “Ayatollah Khomeini and Ronald Reagan had organized a clandestine negotiation, later known as the ‘October Surprise,’ which prevented the attempts by myself and then-US President Jimmy Carter to free the hostages before the 1980 US presidential election took place.”

Did the perpetuation of the hostage crisis throw the election to Ronald Reagan? Would the Gipper have won regardless? It’s impossible to say. It does not matter. Growing evidence indicates that the Republican Party was willing to prolong unnecessary suffering and to create a ruinous relationship with a major Middle Eastern power, risking even the possibility of war, in order to gain an electoral advantage.

So it should come as no surprise that the Republican Party would do the same in 2015. In historical context, there are only two differences between the current travesty and the previous. First, is the openness by which this particular stunt was done. There was no attempt to hide or cover-up the most recent scandal. This fact may only indicate the growing arrogance of a party that has successfully connived its way to power for the last forty years. The GOP felt that there would be no political price to pay for their duplicity. They may be right.¹

The other difference is that this incident seemingly had nothing to do with electoral politics. This is nothing more than an extension of the standard, anti-Obama, collective orgasm that the Republican Party has become. Is this latest stunt so far out of character for a troop of con artists referring to itself as a political party? The last six years are a testament to the Republican willingness to cause unnecessary suffering for the sake of political gain. Governing is never the goal, as Mitch McConnell, one of the signatories of the above letter, admitted when he stated that his primary goal was to make Barack Obama a one-term president. Healthcare? Economic recovery? Medicaid? The Republican Party is even willing to default on the faith and credit of the nation in order to score political points, backing off only when the strategy started to backfire and scare their corporate patrons.

Normally, however, the strategy does not backfire. The cold, hard reality is that this most cynical Republican strategy is extraordinarily successful. In the late sixties, an age in which Americans were finally beginning to question the norms and values of American exceptionalism, hegemony, capitalism and materialism, Richard Nixon did become president…and completely delegitimized the office. Despite this, Ronald Reagan was elected and was instrumental in reversing the civilizing policies of the New Deal responsible for America’s most prosperous era. Reagan Republicans, in league with Reagan Democrats, resurrected the historical oligarchy that characterized most of U.S. history.

Despite birthing an extremist foreign policy the likes of which could be a plot for a dystopian science fiction, starting two simultaneous wars based on lies and distortions, leading to international scorn and destabilizing an entire geographic region, then collapsing the global economy, the Republican Party remains a legitimate political force in the United States. Their denial of established science and stalwart adherence to medieval, theocratic dogma is the laughing stock of the world, yet they remain in a position to influence global policy in the most powerful nation in history.

The Republican Party may be an international embarrassment and a political abomination, but we keep electing them into office. We, American citizens, allow conservatives, represented by the GOP, to control a larger percentage of our state governments, pushing a piecemeal policy of historical regression. They control our lawmaking bodies at the local, state and national level. They control the Supreme Court and a significant proportion of our judiciary. Media and think tanks are dedicated to the perpetuation of Republican idiocy, and we, the citizens, are the ones who turn the channel, tune the radio, access the websites and drink down the toxic rhetoric with gusto.

When will we turn our backs on this national crime against reason, civilization, and good taste?

2 thoughts on “Remember How the GOP Responded to Obama’s Historic Agreement with Iran?”