SOCIAL SCHIZOPHRENIA AND WHY WE CAN’T BREAK THE GUN FEEN

Yet another brutal massacre in yet another school in which the perpetrator should have been easily identified and never allowed to get anywhere near the military grade weapon he used in his bloody mission.

So let the rhetorical acrobatics begin.

To me, it’s nothing short of amazing watching one side of what should not even be a debate contort itself around a discredited reality in a selfish effort to protect a flawed notion of “gun rights.” Now part of this is the professional framing with which the NRA and its political lapdogs protect the $15 billion industry. Part of it has to do with a “cult of the gun” that has emerged in the last hundred years or so as a result of, yes, gun marketing, but also from the cultural mythology evolving from popular mass media starting with dime novels and cultivating in Hollywood pictures. Finally, the last part is the cultural hysteria and paranoia that is stoked by the political class and a media driven by “it bleeds it leads” twenty-four-hour news cycles–ironically reinforced whenever there is a mass shooting.

Around and around we go, accomplishing nothing…only to mourn and become outraged when the next massacre happens. The underlying issues do not get addressed.

Does our nation need a sensible and comprehensive gun control policy? Yes! Of course. It’s insane that we have civilians walking around with military grade weapons. It’s insane just how easy it is to get a gun. It’s insane the raw number of guns that are lying around in our country.

Do we also need to invest in better Mental Health identification and treatment? That goes without saying. The U.S. clearly has a problem with mental health at all levels of the treatment process. This ties in with physical health, as well. Access to health care, in general, is a predictor as to whether or not a mental health issue goes untreated. In the U.S. the poor, covered by Medicaid, are less likely to go untreated than those who do not qualify for Medicaid but cannot afford insurance. So if you are a gun rights advocate who wants to cry about mental health, great! Let’s get together on single-payer.

Will focusing on these two issues solve the problem?

I’m afraid not. Even if we can ban the sale of all guns and perform the kind of comprehensive, house-to-house gun confiscation that was a mainstay nightmare of the right under the Obama Administration, the underlying anomie that is animating our gun problem will go unresolved.

Look, before we start, any conversation about guns and gun-control should be centered around a basic set of accepted facts. In the face of horrific tragedies such as Columbine, Sandy Hook, and Stoneman Douglas, let alone Las Vegas and Orlando and…well, just fill in the depressing blanks…it’s easy to forget the facts and respond to our grief and anger irrationally.

First, violent crime rates in the United States are at historic lows. Our nation is not becoming increasingly violent.

And the United States is not a particularly violent society as compared to our peer nations. 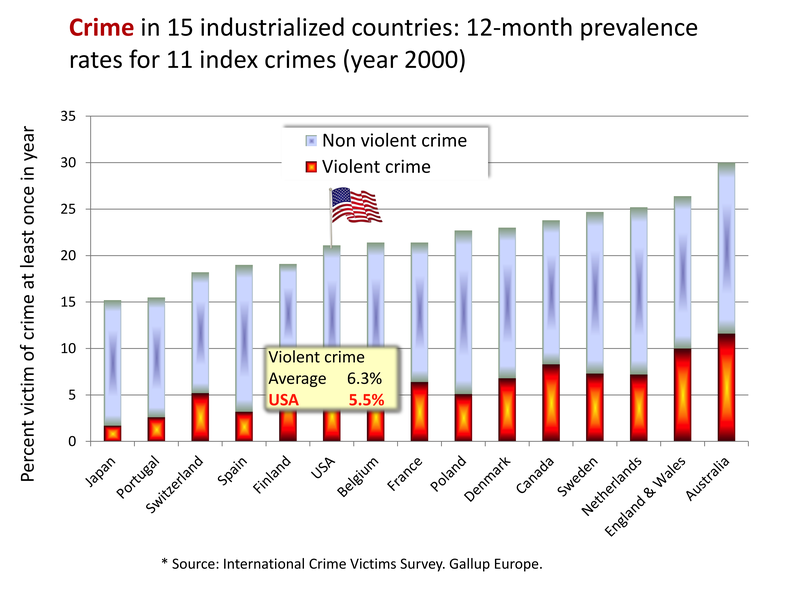 Despite the low levels of violence, mass shootings are becoming more frequent and more deadly.

And Mental Health is only a small part of the problem. The vast majority of shootings, in general, do not involve people with mental health issues and only about 1 in 5 mass shooters has a mental health diagnosis.

Most importantly, the United States has an obnoxious amount of guns, and there’s absolutely no evidence that being so heavily armed equates to safety. In fact, the opposite appears to be true.

So where does all of this information leave us? We have to ask ourselves, why are people turning to guns to express their anger or frustration or desperation. What is going on in our society that Americans, when becoming violent, are more likely to become violent with a gun?

The first explanation is as clear as the nose on our faces. Because we can. Guns are absurdly easy to get in the United States, and there are strong, cultural currents that encourage gun ownership. When there are more guns, the probability that an interpersonal conflict will end with a gunshot increases.

Guns also give us the license to make decisions we otherwise might not make. This goes along with the saying, “if you have a hammer, every problem looks like a nail.” Without a gun, how we conduct ourselves with regard to interpersonal conflicts, with regard to social frustrations, is shaped by other priorities. A gun, however, encourages gun use. With a gun in hand, we may have a false sense of security that encourages riskier behavior, behavior we would not participate in without the weaponry.

And, as every gun owner is aware, you cannot unpull a trigger.

But I think there is more. In an earlier post, I expressed interest in a notable trend. Why was it that gun ownership rates were so different all over the country, even between states that had relatively similar loose gun laws? 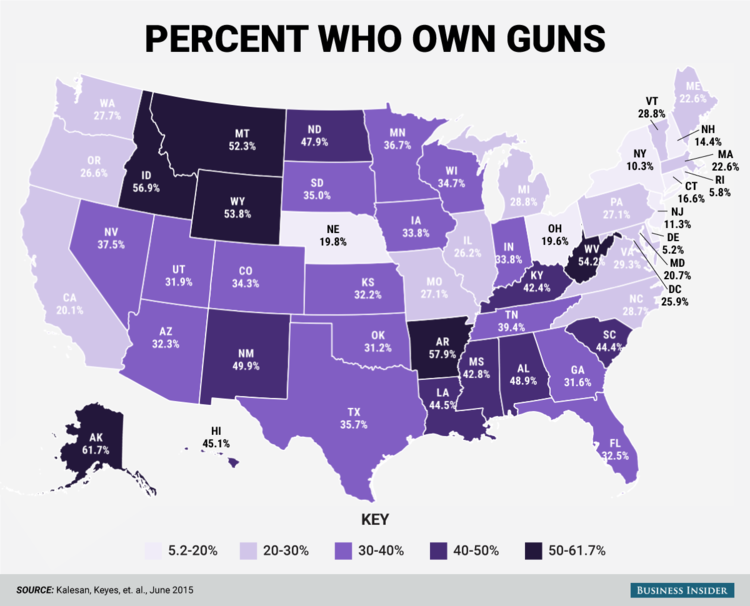 How is it that Vermont, which has similar gun laws as, say, Louisiana, has significantly lower gun ownership rates?¹ Why such variation in gun ownership? This led me to ask, why do people buy guns, to begin with?

According to Pew Research, Americans buy guns for protection. But protection from whom, or what. When our Founding Fathers added the 2nd Amendment to the Constitution, they had legitimate concerns from their point of view. They had just gained liberty from the most powerful nation on Earth, a nation with an active and populous colony and access to the continent from the north in Canada. Native Americans, knowing full well that the Proclamation Line of 1763 was relegated to the political trash heap, were preparing themselves for an inevitable conflict with the white colonists. There was great uncertainty as to the viability of this new government, or if the leadership would trade their republican rhetoric for more authoritarian ends. Most importantly, most especially in the South, the erstwhile English colonists were holding millions of people in bondage, many of whom were promised freedom from British officers during the Revolution. Under these circumstances, the innate paranoia was understandable.

It was understandable, but no longer relevant in the 21st century. The legitimate fears on which our nation was founded are far behind us. As a sociologist and a historian, I know that social constructs do not die easily. It’s a condition that I refer to as social schizophrenia, the anomie that exists when the accepted constructs are no longer relevant to the existing reality. The conditions noted above were an integral part of the American experience for at least seventy-five years. To what extent is this sense of fear embedded in our historical structures?

Pew also noted that many Americans associate gun ownership with freedom. Of course, this is ridiculous. There is no correlation between nations that are free and nations that are armed. And, no, Hitler didn’t take everyone’s guns away. In fact, he made it easier for most Germans to get guns. To put this in perspective, there was a report put out shortly after the war in Afghanistan revealing that, in that country, an AK-47 was cheaper than a chicken. Afghanistan was certainly not an example of a free nation. Neither is Yemen, the third most heavily armed country in the world after the United States and Serbia.

We don’t need world comparisons to debunk the association between guns and freedom, however. Just look around at all the metal detectors and violations of privacy Americans have to endure to walk into public buildings, or concerts, or any public gathering place. Look at the proposed solutions to school shootings from the right: increased police presence, armed guards, armed teachers, metal detectors, random searches, zero tolerance policies. Guns are clearly associated with less freedom, not more.

Freedom, however, is a useful rhetorical device for the third element of this social schizophrenia. Namely, the perpetuation of the “gun rights” mythology serves elite interests. As mentioned earlier, the civilian gun market is worth over $15 billion dollars a year. Furthermore, whenever there’s a mass shooting, gun sales soar. Although, now that the Obama Boogeyman has taken up the Presidential Rocking Chair, this may no longer be the case.  Turns out, having the political arm of the NRA in total control of federal policy may be bad for business.  That being said, there are millions of dollars invested in gun lobbying. Not to worry, there are those pesky states that might want to pass sensible gun regulations that everyone wants. So buy now!

The political influence and interests of the gun lobby and their lapdog GOP conspire to perpetuation this sense of social schizophrenia when it comes to gun ownership. Economist Paul Krugman stepped into political sociology when he linked the right-wing position on gun rights with larger social and policy forces conspiring to break down the social contract and the sense of community that is requisite for a democratic society.

About a year and a half ago I wrote a post in which I highlighted four trends that I noticed with regard to mass shootings and, to a certain extent, shootings in general. I noticed that mass shootings tended to involve the following: Transcendent values, especially motivating for what we refer to as terrorism, anomie and isolation, troubled masculinity and access to guns. Above, I noted that shootings tend to be localized in areas that are high poverty, high segregation, and low education. I also mentioned a “cult of guns” manifest in our American cultural mythology and reinforced through entertainment media. Further, I elaborated a concept of social schizophrenia when it comes to guns and gun rights.

I’m no different from anyone else in trying to make sense of the apparently insensible. I’m just trying to apply the skills that I have at my disposal. I’m not sure how these factors are related and how they contribute to our uniquely American gun crisis. I’m certain, however, that they matter. Somewhere along the line, our society is falling short on its most basic task, Namely, society is inconsistent in socializing its members with a healthy and fulfilling sense of identity. We are all falling short. So many of us, especially so many men, are deprived of those visceral and, dare I say, spiritual, elements that give our lives meaning and purpose and a sense of connection to our fellow human beings.

It could very well be that gun violence is just one more symptom indicating a society in free fall. Instead of meaning, fulfillment, and community, we are, as a people, turning to self-destructive impulses such as drug use, consumerism, and disconnection. We don’t trust our socializing institutions and we don’t trust each other. We are locking our doors and arming ourselves from our neighbors. We are turning inward and are increasingly afraid of the other. The American gun crisis, I’m convinced, does not exist in isolation. It is part of a larger social pathology that needs to be addressed and reversed.

Focusing on mental health will certainly help, but it is not the answer. The problem is structural and interpersonal, not psychological.

Sensible gun restrictions is a good idea, but will not fill the gaping hole in our collective consciousness. Gun violence is symptomatic of a larger, societal disease.