Author’s Note: By now any pretense that Conservative Republicans represent “small-government” must be shattered. The Trump Administration, in concert with the Ryan lead neo-cons in congress, are openly flouting their concept of government…and it’s not small. Rather, conservatives are demonstrating that no cost will be spared in protecting elite interests. The Trump budget, which is mostly a right-wing wet dream does nothing to “shrink” government. Rather it shifts the weight of government away from programs dedicated to helping common people, especially those people who voted for Trump, to already obnoxiously huge military and law-and-order programs. We can look forward to more big government solutions to a non-existent crime surge, an escalation of the war on drugs and police state tactics against brown people.

I wrote on this topic seven years ago. I thought it was of renewed relevance today as the conservative budget is in the debate, revealing the true priorities of the Party of Reagan.

For decades the modern conservative movement has presented itself as favoring small government. This message was perfected by Ronald Reagan when he asserted that “government is the problem.” As president, however, Reagan did nothing to limit government as attested to by increased government spending and what were, up to that time, record deficits. Reagan also didn’t shirk the prospects of expanding the power of the executive at the expense of democratic principles, as evidenced by the Iran/Contra scandal, mining harbors in Nicaragua and expansion of the so-called “war” on drugs. Indeed, the Reagan presidency cannot be defined by his famous mantra and was certainly not an exemplar of small government. Quite the opposite.

One contemporary example is Arizona, a beacon of conservative politics. Recently, despite threats of boycott and reams of bad press, Arizona passed a law that requires the state, as represented by the police, to check the citizenship of anyone under a reasonable suspicion that they might not be a citizen. Gee! I wonder what the telltale signs of being an illegal immigrant are? Surely this has nothing to do with racism! Isn’t this the definition of a police state? Arizona government has also taken upon itself the decision to make all ethnic studies programs illegal under the premise that such programs instill division and conflict among ethnic groups and vilify white people. Perhaps a certain amount of vilification is appropriate when white people are eradicating valuable ethnic studies programs without evidence to verify their claims. Either way, it is apparent that conservatives trust the state to determine the content of school curriculum so long as that state is run by conservatives.

Now conservatives would argue that they favor state’s rights. This is not federal intervention and individual states have every Constitutional right to establish their own laws as they see fit. That pesky 14th Amendment was never meant to protect ethnic studies programs or protect people who might “reasonably” be in the country illegally. But when it comes to regulating the comings and goings of brown people conservatives have no problems with big government initiatives like the Border Fence at the US/Mexico border. Despite the fact that one could make a big government criticism of the project, it’s costs, the many breaches, the fact that there’s no real way to determine if it’s working, the Border Fence has broad conservative approval.¹ 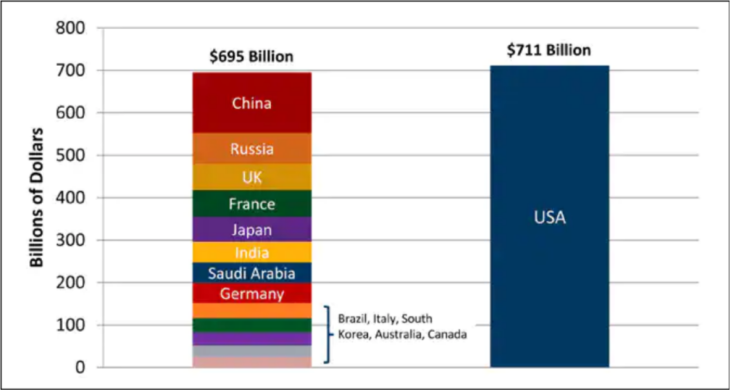 currently, the balance sheet on American defense spending dwarfs that of the rest of the world as evidenced by this Washington Post graph. The United States spends about six times more on defense than our nearest competitor, China. Would we be any less safe if we spent only, say four times more than China, or three times more? Indeed, Representative Alan Grayson is suggesting that the $159 billion being proposed to fight the wars in Afghanistan and Iraq should be used differently. “Next year’s budget allocates $159,000,000,000 to perpetuate the occupations of Afghanistan and Iraq. That’s enough money to eliminate federal income taxes for the first $35,000 of every American’s income. Beyond that, leaves over $15 billion to cut the deficit.” Hmmm, cutting taxes? Reducing the deficit? So far only two Republicans have signed on to co-sponsor The War is Making You Poor Act, and one of them is Ron Paul. Conservatives are noted for their support for defense spending. Any suggestion that, perhaps, asking Americans to foot the bill for 48% of the world’s military spending is a little too much risks the politically hazardous accusation of being weak on defense. After all, conservatives argue, providing for the common defense is in the Constitution. It is, therefore, the legitimate role of the government to spend absolutely ridiculous amounts of money toward that end. Yeah? Well, on either side of the “provide for the common defense” part of the Constitution is “insure domestic tranquility” and “promote the general welfare.” Where do these responsibilities enter into the role of government? But Conservatives only read the part of the Constitution that supports their narrow worldview.

So, too, is the growth of the intelligence industry. Conservatives are of a mind to condone massive intelligence and surveillance programs and institutions when it is in the interest of national security. They trust the government (as well as the corporations contracted by the government) to conduct this surveillance appropriately. Arguably, appropriately means leaving real–white/Christian/conservative–Americans alone while only targeting those who might be a danger to the United States–brown/Muslim/left-wing. Never mind the long history, mostly documented by liberal historians, of the abuses of such technologies against social movements, social justice leaders and organizations pursuing civil rights, peace and equality. Still, national security is national security, and few are the conservatives who will condemn the expansion of the intelligence-industrial complex despite its implications for the Fourth Amendment

Still, national defense is important and it is, indisputably, a significant function of the government, as is locking away criminals. Conservatives especially own the frame for being tough on crime. Mandatory sentencing, three strikes laws, harsher penalties and

capital punishment are conservative staples. Any opportunity to paint an opponent as “soft on crime” is recognized as campaign manna à la Willie Horton. The claim that government is the problem does not stop conservatives from defending the power of the state to lock people away for longer and longer periods. Since the conservative revolution of 1980, the greatest boon has been to prisons. The inmate population has exploded despite a fifteen-year trend of lower crime rates.

Okay, but with this comes the admission that the state should have the power to make such decisions. This is not a small government position. Liberals have argued for many years that, in fact, the state abuses this power. The United States has the highest incarceration rates of any industrialized culture. About half of our inmate population are non-violent offenders, most of whom have demonstrable mental illnesses let alone problems with addiction. Conservatives will not allow such observations to shape their tough on crime policy proposals. Publicly funded mental health and addiction centers are big government largesse–but not prisons. Granted, conservatives are consistent with their support for privatization among corrections institutions, but they have the utmost faith in the government to determine who goes to prison, even when the government has demonstrated poor judgment in such matters. Conservatives even abide the power of the government to determine that an individual should die at the hands of the state. No small government here.

Conservatives also promote a different kind of big government, what I refer to as institutional overlap. Conservatives are active promoters of expanding the reach of government through alignment with other institutional sectors like the economy and religion. Here we see conservative “government isn’t the solution” paradigm used to its fullest to perpetuate elite interests. Government may not be a solution, but the needs of government constitute a fundamental boondoggle for corporations itching to provide privatized services at the public expense. This paradigm is touted in almost every significant arena of the public good. From an expansive military and intelligence complex with a long history of graft and public parasitism to the overt attack against public schools and embrace of private voucher systems. There is no limit to the extent that conservatives will not promote privatization. This is not shrinking government. In fact, this is an expansion of government to fulfill the drives of private corporations. After all, the state provides the need for services, to which our economy demands growth, whether it is combat for mercenary soldiers or convicts to fill privately owned prison cells, the government under conservative leadership becomes the shill for corporate ends.

This is also true for the alliance between conservative government and Christian institutions. Conservatives spend a great deal of time confusing the soap box for the pulpit in their endeavor to “restore God” (their God) to his rightful place as head of state. And make no mistakes, God is a conservative. God hates welfare, Social Security, and Medicare; He hates gays and unmarried, pregnant women; and God simply will not abide the transgendered or illegal immigrants. But God loves guns! And God will, of course, never let the Earth get warmer no matter what humans do. God loves big business and big businessmen. But if the government doesn’t let God in the schools, or the Ten Commandments on public buildings then He’ll send hurricanes to wipe out our cities and let terrorists fly their planes into our buildings.

None of this is surprising. There are very few truly “small government” paradigms floating around in politics of late. Conservatism and liberalism are reference group paradigms. Each group has definitive ideas on the responsibilities of the government toward the governed as well as the limitations of said government. Conservatives, like any other reference group or interest group, understandably endeavor to enlist the powers of the state to institute what they see as the best interest of the nation. We shouldn’t begrudge them for this, as every interest group so endeavors. That’s why we have political parties representing so many different political perspectives.

So there is no genuine debate between “big, tax and spend liberal government” and “small, fiscally responsible conservative government.” The debate is about the role of government in the lives of its constituents. And that is a worthwhile debate so long as it’s kept honest.

Note: Some links and graphics from the original were no longer valid and were either removed or replaced. Some were replaced with updated information.

1. It must be noted that the border fence is not universally approved by conservatives, considered wasteful by the Libertarian Party, for instance.

2 thoughts on “The Myth of Small Government Conservatism”