Just over two years ago, the last time the Republican Party jumped on the “let’s hold the government hostage to get what we want” scheme, I wrote a series of blogs elaborating what I called the Dr. Moreau Theory of Republican Politics. That is the corporate elite reinforced the energy and anger coming from the far right to build the Tea Party beast as a check against Obama Socialism in the form of higher taxes and regulation. In doing so, however, they created an anti-government monster that posed a threat to those aspects of government that the corporate elite actually like, the largess, the protections, 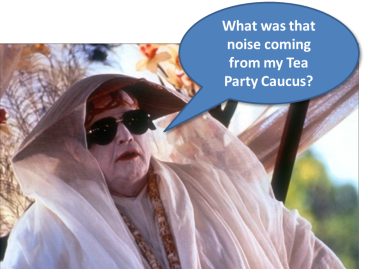 the corporate welfare. So the corporate elite were in much the same position as the tragic Dr. Moreau, surrounded by beasts of his own creation that ultimately destroyed him once they were out of his control.

Mainstream Republicans were also pulled along in the great Tea Party tide of 2010. Among them was the almost equally tragic John Boehner. When Republicans wrested the House from Democrats, Boehner, a man who made his name as a shill for big tobacco, became the most powerful Republican in the nation and, technically, the third most powerful man in American politics.

Unfortunately, the monsters holding him up hated him, resented any attempt on his part to, you know, govern. After all, “Government Baaaaaad!” “Government Baaaaaaaad!” It’s not a philosophy, it’s a mantra from which there can be no deviation. Boehner’s reign was doomed from the start.

Now, I’m not a particular fan of Boehner, but I must admit, he and what is left of the mainstream Republicans did manage to beat the monsters they created back into their cages at critical moments, especially when the beasts were threatening to destroy the faith and credit of the United States by voting against increasing the debt ceiling. For this, Boehner was reviled as a false conservative and an Obama lover.

For his pains, John Boehner will go down in history as one of the least effective House Speakers in American history. And, aside from tirelessly beating back the Tea Party beasts every time they broke from their cages, Boehner’s legislative legacy is abysmal.

So I almost feel bad for the guy. I don’t have to agree with his politics or his politicking to have a certain sympathy for someone who, despite his best efforts, could accomplish virtually nothing not because of resistance from the opposing party, but as a result of infighting within his own. Then, when phantom acts of governance did happen, he was criticized for it. He had betrayed the conservative cause, appeased the Obama or whatever. It’s certain that Speaker Boehner had a legitimate desire to govern. It must have been exhausting, spinning his wheels, generating nothing but smoke and derision, accomplishing nothing, then having to control the damage.

And the weight must have been telling. Watch his resignation press conference, He’s absolutely giddy–to the point of actually singing Zippity Do Dah on his way to the podium. A great burden has been lifted from his shoulders. He actually looks good!

Of course, part of that could be his expectation of joining the very lucrative lobbying career that certainly awaits him upon leaving.

Regardless, the Tea Party has finally taken Boehner down. Announcement of his resignation was celebrated throughout the right wing. Now the Tea Party has tasted blood. Woe unto the next Speaker. The Tea Party does not have enough votes to appoint one of their own. However, they have demonstrated a willingness to lay long in wait, slowly driving their prey to exhaustion. A long, grinding, grating political death for whomever succeeds John Boehner.

One thought on “On John Boehner and Dr. Moreau”