OR THE DIFFICULTIES OF ACADEMIC HONESTY

The last couple of semesters I’ve had the unfortunate opportunity to talk about American gun culture and its associated gun violence in real time. It’s actually a great topic through which to understand the sociological imagination and to offer relevant lessons on how sociologists do our work. I try to steer the conversation away from the typical 2nd Amendment v. gun control debates that are the mainstay of media presentations on the subject. How can we get past the rhetoric on this issue, that gun-control means only the criminals will have guns, or that gun ownership equates to blood in the streets, and actually address what is, in the United States, a serious issue in an informed and rational way?

After all, the guns rights folks have a point, gun ownership isn’t entirely the problem. There are plenty of gun owners in the United States, the overwhelming majority of whom are not gunning people down in the street. On the other hand, the gun control advocates have a point in suggesting that gun ownership does make someone who is, for whatever reason, inclined to violence, much more efficient in carrying out his ends. Perhaps people who have a history of making bad decisions should not be trusted with a gun.

But guns only tell part of the story. This is often the case in sociological phenomenon. One single variable is rarely ever decisive in and of itself. After all, Canadians have plenty of guns and yet are not nearly as inclined to use them on each other as are Americans? Why? We have states like Louisiana, with high levels of gun ownership and high levels of gun violence and high gun homicide rate in the country. On the other hand, Hawaii has similar gun ownership levels, but much lower gun homicide rates. Vermont has virtually no gun laws and very low gun homicide rates. However, Vermont also doesn’t have particularly high gun ownership levels. What’s going on? A good rule of thumb in any argument is, if both sides can find valid statistical evidence to support their position, you are probably looking at the wrong variables.

There must be some variable left unexplained. There must be some combination of circumstance that inclines someone to violence, puts a gun in his hand, prompts him to use that gun against a fellow human being. Pointing to guns alone is not the answer. So in class I like to posit the question, “what other variables might be involved.” A couple of semesters ago I offered a hypothesis, which I was careful to point out was untested, that American Individualism might be a contributing factor. The class then discussed why that might or might not be and what social facts we might need to prove or disprove the hypothesis. Despite speculating on this for over a year, however, I never actually tested this hypothesis.

Last week I took it upon myself to run the numbers on this hypothesis in the face of yet another, heartbreaking mass shooting, this time in Louisiana. I started out with the assumption that political conservatism would be a good proxy for individualism. Made it easy. I could use polling data to delineate the most conservative states, match that against gun ownership and gun homicide rates and voila, I have my simple test. I really didn’t want to spend too much time on this. I’m

not submitting to the American Sociological Review (ASR), here. I’m just writing a blog. However, I couldn’t put aside the idea that I might be wrong, which I believe a central component to the sociological imagination. So I did a quick check and found Vandello and Cohen’s (VC) paper on Collectivism and Individualism at the state level. Perfect. Yes, I had to invert their measure, but their index would work for what I was examining. When I tried to correlate their measure of collectivism against individualism, however, it turned out that there was no meaningful correlation. Liberal states like Vermont scored the same as Oklahoma on the VCs suggested index. Clearly there was a problem right from the start. Perhaps individualism means something different in Vermont than in Oklahoma, or Oklahoma isn’t as individualistic as is believed, or Vermont is not as liberal. Something wasn’t added up. 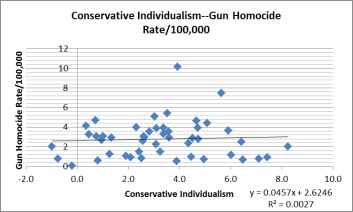 r ASR, I admit, but it will do for a preliminary analysis. It turned out that conservatism and conservative/individualism had similar correlations to gun ownership (r2=.35 and .33 respectively). However, whereas conservatism had a very weak positive association with gun homicide (r2=.11), conservative/individualism had virtually no correlation at all (r2=.01). Well, that pretty much settles that. No matter how I tried to test the numbers, I simply could not get the results to work.

On the other hand, I did get one result that was intriguing. Clearly, my hypothesis that Individualism and what I denoted as conservative/individualism has absolutely nothing to do with gun homicide, or even homicide in general. However, it turned out that collectivism as measured by VC was positively correlated to gun homicide and homicides in general (r2=.21 and .23 respectively). Not particularly strong, but I didn’t do a regression. I was only looking for correlations for the sake of argument. Based on my speculation, I should have been able to hypothesize that collectivism would have been negatively correlated. Such was not the case. Not only did I prove the null hypothesis, but, according to my speculation, I actually contradicted my assumption.

Look, I really think the individualism hypothesis was a really good one. However, it turns out to be wrong. Granted, this was a preliminary analysis. There may be different, more valid measures of collectivism/individualism than that offered by VC. I might be able to run different variations of the data. Based on what I now know, I see no reason to pursue this line of analysis. Granted, there are some interesting outcomes that offer insights outside of the gun debate, such as the role of individualism/collectivism in our political ideologies of conservativsm/liberalism is, apparently, more complex than previously assumed.

When it comes to gun violence as measured by looking at gun homicides, however, there’s nothing to suggest that my hypothesis was correct, even using the admittedly sketchy variables that I selected. It is, therefore, incumbent upon me to let that hypothesis go. It is the difference between science and belief. Too often in the political discourse do we see what Paul Krugman refers to as Zombie ideas, concepts that have been soundly killed by the evidence, yet keep coming back. Pundits put out an idea with no basis in fact. If the idea sounds good (like my individualism hypothesis) it’s embraced and accepted as fact. It may even become a central belief, like the welfare queen. When the facts contradict, refute and disprove the validity of the idea, the facts are often rejected in favor of a good sounding idea.

Okay. So I’m going to let go of the individualism idea. However, I am still going to hold to the Durkheimian analysis that gun violence in the United States is related to some anomic factor in American society. After all, I did find a correlation between poverty and gun homicides. More importantly, we need to all be dedicated to letting go of our assumptions if we are to really address our culture’s issues with gun violence. Yes, almost all gun owners are responsible. No, gun owners are not safer than non-gun owners. No, freedom is not dependent on the 2nd Amendment. However, Americans do shoot each other a lot more than do other nations. There must be an explanation.

A note on Figure 1 (added 5/23/2018: Other studies have found stronger positive correlations between gun ownership and “gun deaths” using somewhat different models. For instance, the correlation is stronger when you look at Gun Deaths vs. Gun Ownership Adult Population. But gun deaths include gun suicides. This study by the American Public Health Association uses a measure of gun suicides divided by total suicides as a proxy measure for household gun ownership. Really, we need better measures of gun ownership in order to get more valid data.