DO YOU REALLY WANT CORPORATIONS DECIDING WHAT CONSTITUTES “FAKE NEWS”

There has been a great deal of furor and fever over what appears to be the spread of “fake news”. For good reason. Citizens in a democracy need access to reliable, factual news by which to make informed decisions in the interests of society. Information should, in what is widely considered The Information Age, be easier to access and to analyze than ever. Ironically, the efficiency by which information can move and be accessed in our society seems to be having the opposite effect. In the Information Age, the traditional and reliable institutions from which we received information throughout the modern era, namely the media and interest groups, are breaking down.

Information is becoming more atomized, decentralized and deprofessionalized. Information comes to us at light speed from multiple and sundry sources.  With such volume, it’s become more difficult to vet for quality.  As is often the case with technology, advancements in efficiency do not necessarily correspond with improvements in quality. Citizens find themselves facing a megastorm of low quality, rapidly changing news. Much if it is irrelevant. There’s a great deal of quality work from diverse sources. A great deal more, however, is fake. With so much confusion, people are tasking the new institutions involved in this Information Age media to do something to vet the quality of information showering upon us.

This is dangerous thinking. The public, righteously concerned about the quality of information that they are getting, wants companies like Facebook, Twitter, and YouTube to fix the problems that allow so much presumably fake news onto our feeds. Regardless of how legitimate the need, the proposed solutions put control of 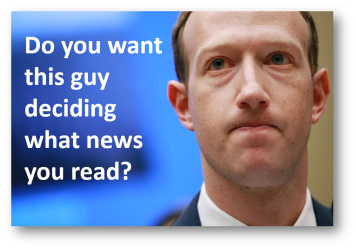 this process in the hands of the corporate elite and politicians. It is almost a clamorous appeal for the corporate state to censor information. When state or corporate interests are put in charge of separating the real news from the fake, surely they will do so in their own best interests first. Those interests invariably include marginalizing those who speak out against the corporate state.

Yes, there’s evidence that they shut down hate speech and obscene material and the dreaded Alt-Right. It doesn’t matter. We really don’t want corporate boards of directors deciding which views get a hearing. We certainly don’t want the marketplace of ideas to become a commodities marketplace. In short, do we really want Mark Zuckerberg protecting us from fake news?

The rise of fake news in concert with our hectic Information Age carries two important threats to the marketplace of ideas: the threat of outside forces and the threat of group closure. Neither of these threats can be addressed by placing regulatory functions in the hands of the political and economic elite. They can only be addressed through education and democratization of the marketplace.

The first and the most publicized threat posed by fake news is the infiltration of the information superhighway with malevolent highwaymen intent on sowing confusion and discord for the sake of devious interests. This should not come as a surprise to anyone familiar with the role of the PR Industry in selling toxic sludge as if it were drinking water for the sake of corporate profits. The only difference is that now it can be done much more quickly and efficiently.

And they’re good at it. Oil propagandists spread false information and confusion in the global warming debate despite clear evidence that we face calamity. The tactics haven’t changed much from the days of defending tobacco or the lies spread about sugar. It’s no secret that political parties sell their candidates in much the same way companies sell toilet paper or toothpaste. Add ingredients like the autonomy and decentralization of the internet, the ease with which anyone could create a platform online, and we have the perfect mud pie for information congestion.

Since news is now interactive through social media, we all become instruments for spreading information, real, fake and irrelevant.  Ironically, this interactive nature of the Information Superhighway has great potential to democratize the Marketplace of Ideas. Clicking and sharing, however, is so easy that it becomes a mindless exercise. Democracy cannot be cultivated mindlessly.

Furthermore, the Information Superhighway is a globalized phenomenon. Why shouldn’t interests in Russia get involved in American politics? After all, it’s not like the United States holds the democratic process sacred. If Vladimir Putin can, say, destabilize the world’s most powerful nation on earth by…oh, I don’t know…helping a mindless, emotionally unstable, orange manbaby become the country’s chief executive and the top commander of the U.S. armed forces, why wouldn’t he? It’s no different from selling lung cancer.

Unfortunately, asking corporations like Facebook or Google, or states like the United States or the European Union, to regulate news content is simply legitimizing the power of these often nefarious interests to control access to information. Corporations will serve the interests of the board of directors, not the Demos. The state will serve the interests of the elite, not the Demos. There’s no mechanism that can be devised to provide a check against this power. It’s crucial to remember that every elite institution yearns for unlimited power to control the discourse. Giving these groups the power to decide what constitutes real news is a Faustian Bargain.

Now the second threat is, in my mind, the most serious despite being the least publicised. Fake news exacerbates the tendency of individuals to secure and legitimize their group identity even in the face of the facts. Fake news gives the individual a powerful tool for entrenching his beliefs at the expense of alternative explanations. First, fake news reinforces the accepted discourse of a given group. It becomes the accepted facts, the incorrigible propositions of the group. Secondly, any discourse that serves to challenge these incorrigible propositions can be dismissed as fake news.

Consequently, groups that embrace particular discursive formations, political groups, religious groups, other ideological groups, become more insular and exclusive. They become, in sociological terms, closed groups. These are groups in which there is little interaction with outside groups. There is little opportunity for growth and tremendous potential for abuse under such conditions. A marketplace of ideas cannot thrive in an environment composed of such insular and exclusive groups.

Again, this second threat cannot be addressed through regulation regimens controlled by states and corporations.

If we really want to be protected from fake news and, at the same time, promote democracy, then we have to take on the responsibility of evaluating the news ourselves. A knowledgeable citizenry is the best defense against fake news. Why do people and companies and nations create and disseminate fake news? Because they can and because it works. Consumers click and read and share information with very little critical evaluation. Indeed, research suggests that fake news spreads faster than real news. Social media, be it Facebook or Twitter or Google is not to be faulted for this. To a certain extent, the fault lies with the consumer. If we are going to stop the spread of fake news, that responsibility should rest with us. A little fake news self-defense is in order.

Some time ago I posted a piece that touches on this subject. I offered what I think is some good advice. In this post, I argue that what we need to do is to cultivate what I called a “slow knowledge” culture. We need to learn how to limit the number of sources of information that we use and increase the amount of time we spend evaluating what we access.

If there is an institutional or structural solution to fake news, it lies in education. Gone are the days when we could ask students to learn a chunk of content, then assess them on their ability to regurgitate that knowledge via bubbles. Enlightened humanity has developed tried and true methods for discerning truth, for evaluating knowledge. The problem is, schools spend precious little time teaching these methods.

First, all students should, from a very young age, have access to media literacy courses. This suggestion is nothing new. Real progress on this, however, has been slow in coming. It may be because any media literacy course would include lessons on interpreting advertisements. The last thing corporations want is for an entire generation to be able to identify the vapid nature of consumerist advertising.

Secondly, courses that are designed to focus and systematize thinking should be taught as such. Namely, science, history, and literature should be taught in such a way emphasizes thinking skills rather than knowledge of content. Science teaches deductive reasoning skills. People can apply this to evaluating news by identifying the predictions inferred by the worldviews of those presenting the information and testing them for validity. If, for instance, news pundits suggest that passing tax cuts will lead to increased wages, the consumer can use deductive reasoning to test that prediction.

History should be taught with the goal of cultivating inductive reasoning skills. Key to historical thinking is evaluating sources. This is foundational to slowing our thinking and evaluating the news we receive before we pass it on. It’s through historical thinking skills that consumers can identify and assess connections between stories. By emphasizing research, history teachers can cultivate fact-checking skills, also integral to evaluating the news. If one might reference Trump as a fascist, or Obama as a socialist, those are claims that can be researched and tested.

Literature develops deep reading skills. Consumers with a background in literature develop a respect for literary aesthetics but also digging into the written word. They learn how to differentiate purpose, inference, subtleties in language designed to elicit emotional responses. These are powerful tools for girding oneself from the emotion-driven commentary that often passes for news.

The humanities, in general, are fundamental for developing critical thought and yet, they are the first to go when it comes time to focus on school testing or budget cuts. Students should have access to courses like philosophy, logic, debate, speech, and human culture. These topics don’t only enrich the individual but create a globalized mindset that eschews group closure, fosters inclusion and open-mindedness and shapes neural platforms through which the individual becomes a stronger, more critical thinker.

Yes, organizations like Facebook and YouTube can make some reforms, but these reforms should be designed to democratize information assessment. Openness requirements should improve the ease with which individuals can trace sources. Consumers should be able to readily track the vested interests of the sources of our news consumption. Maybe there should be some credentialing features that provide information on the backgrounds of those of us who comment on the news, including our political interests, biases, and expertise. Surely, social media must reform privacy policies.

What should not happen, however, is for the power to limit or block presumably fake news to be put in the hands of any state or private institution. With a little training, the people can decide for themselves what constitutes fake news. With a little slow knowledge, we can vet out the Russian interlopers ourselves.